Keeping with the theme of building, my last workshop for the younger elementary students was about building structures of different materials. I first read the kids the classic tale of the Three Little Pigs. This is an amazing little story that can be used as a starting point for a Scientific Method / Building Lesson Plan.

After that we discussed the different materials that were used to build the three houses. I asked the kids to make a hypothesis whether the story is correct. Here are some questions we discussed: 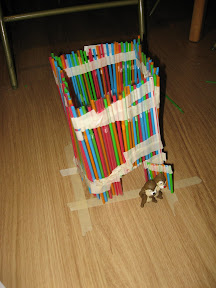 Then was the fun part: the challenge. I divided the kids into three groups. They had to be the three little pigs – one group built a house of STRAWS, the next built a house of POPSICLE STICKS and the third had to build a house of STONES. Another way to approach it, maybe better for the scientific method, is to have each group make all three houses. (That way, the people building the houses is a controlled variable as well). But in my case, I was trying to save on time.

After a half hour, I was the big bad wolf and came with a blow drier and tried to blow each house down. 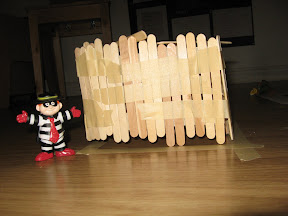 At the end, we discussed the results, and talked about the different materials used to build houses in general. We of course talked about all the variables, and what we didn’t control for.  How we could improve the build was also a huge discussion point.

I thought that the straw and wood house would blow over, none of them did. The kids liked that the results were not what was expected. 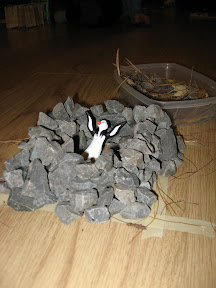 Also, we discussed how the masking tape was a huge help, and that without it, there would be no support. Also we compared the masking tape to the real world of building houses – what it would represent.

This was a great science activity, learning to hypothesize, to do an experiment, to test out the hypothesis, and of course to build scale models of real objects/houses. The students had a blast!