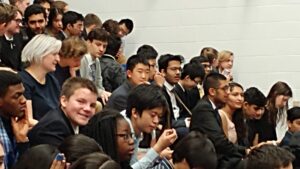 The general school system in Alberta is setup slightly differently than in Quebec.

In Quebec, children go to Primary School (Kindergarten to grade 6), then to Secondary School (secondary 1 to 5 – grade 7 to 11), and then they choose a college for two years (the so called CEGEP – Collège d’enseignement général et professionnel), or work (only after college, the student can go to a four year university program).

This in itself creates a different set of circumstances for the students. In Alberta, in grades eight and nine, the students are full of “teenage” hormones and sure of themselves (as they were already in Junior High for a year or two) – the oldest of the kids at school, the “kings” of the school.

In Quebec, a grade eight or nine student is still full of the hormones, in full swing of puberty, but this time, they are still the little kids of the school, they still have no say in school life, they have to bow down to the older kids.

The school setup also creates other different dynamics in the two provinces. While in Alberta, the junior high school focuses on junior high type issues, in Quebec, the secondary school must diversify their activities to satisfy the whole school population. On one hand, the students in Alberta have a more focused approach, but in Quebec, the younger students get to see older students’ behaviors, issues and vice versa. This setup creates a very different school environment and somewhat different students in the two provinces.

It’s interesting how the basic setup of the school system has such an impact on the environment and the attitudes of students. I can’t comment on which system is better, as there are pluses and minuses to both, but the two school systems definitely create different types of students, and ultimately a different general population.